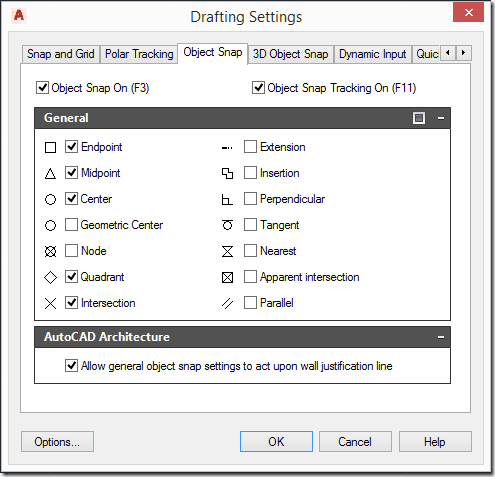 Then why don't people at SU development do something about it? We don't do anything about this because it isn't something that can be done. SketchUp's inference system is designed to be on all the time– never turned off. SketchUp without geometric inference wouldn't really be usable.

Bacus is here. Thanks a lot sir that you considered this post. Well I guess, some people are used to AutoCAD customized snap options. I use a lot of AutoCAD and find it difficult many times to work with all types of snaps enabled.

Is it possible that this feature be added in SketchUp.??

Nov 6, 2010 - While in the middle of a command, you can temporarily turn on a needed. SNAP OVERRIDES (temporary osnaps). M2P – Mid Between 2 Points. One letter shortcuts into the CUI file for my 2015 Mac version of AutoCAD. Snap to the mid-point of one of the vertical lines then snap to the insertion point of the text. The order that you pick is important. The first object you select will remain where it is; the second object will move to align horizontally with the first one.

I'd be really grateful. Rock1, I am guessing that you are a SketchUp beginner. Apologies if you are not, but from time to time, many beginners complain about the lack of precision control due to SketchUps inference engine.

One of the ways to get around this is with the mouse wheel. Place your pointer where you want to go then spin the wheel to get close enough to override the precision of the previous snap. Typically you will be able to lock on the point you want. Then zoom out with 'previous' (or the mouse wheel), and lock on to the next spot. SketchUp will lock on center (mid point), physical intersection, end, a point on, and inference points.

You can orbit, etc. While locking on points. ACad it's not, thank G0d (just me)! The only things I miss are projected intersections of, and intersection view of (by my Cad). Once I overcame my bias, I was OK, you will be too.

The problem with zooming in to be able to pick the point you want is that some times the model you work on is so large (geometrically) that you get viewport clipping. I've had some rather large models like that - quite often. And it makes modeling frustrating when you try to snap to a given point, but can't zoom further in because clipping makes the geometry you want to snap to invisible. (yes, model is at origin and there are no stray geometry far off - it's just a large site model.) There are legitimate cases where it'd be more efficient to turn off certain snapping points.